"The South Fork American is one of the country's premier recreational and historical rivers. Known as one of the most popular commercially rafted rivers in California, the South Fork has natural beauty and whitewater rafting for almost everyone. 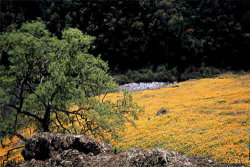 The South Fork of the American is unusual in that most of the land along the river is privately owned. Homeowner's, commercial rafting companies, private boaters, ranchers, anglers and picnickers all share this beautiful river. Rafters may stop on public lands along the river, which are marked by blue signs."

Excerpted from The American River: A Recreational Guidebook

The South Fork of the American is also quite rich in Gold Rush history. As you float down the upper stretch of the South Fork you'll notice the ditch running along river left. The ditch provided irrigation water to the Coloma Valley. You'll pass through Marshall State Park and Sutter's Mill; the site that marked the beginning of the gold rush when John Sutter first discovered gold.

The South Fork is conveniently located along Highway 49, a short distance from Interstate 80 or Highway 50. Tucked away in the Sierra foothills, the South Fork American River is just 35 miles east of Sacramento or 22 miles south of Auburn. 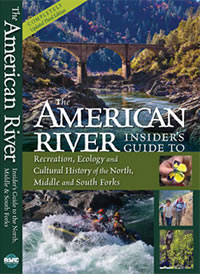